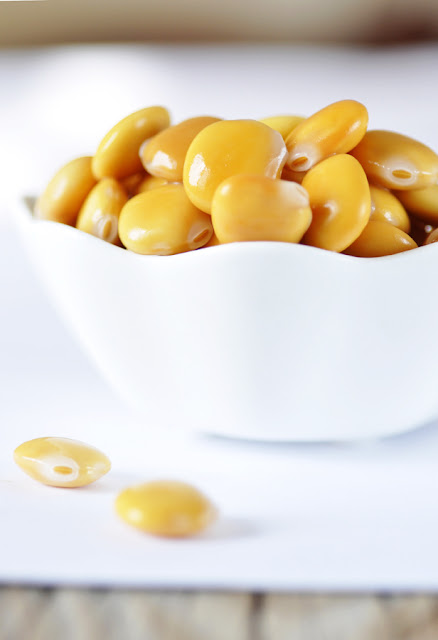 Lupini Beans made it into the 2010 SAVEUR Top 100!!! That's great, but what's more important to me is that I finally learned about the English name of these beans. LUPINI BEANS!!!!! I got to know lupini beans as a popular salty snack in the Mediterranean region and Portugal. They were introduced to me as "Lupins" and oh so many Google searches did not get me anywhere. In Portugal they are called Tremoços. There they are served in pubs with beer, like you would get a little bowl of peanuts in other places. Lupini beans make a perfect, healthy appetizer to a nice, big meal or even just a snack between meals. They have the second highest protein content of all beans, after soy beans.

I saw ready-made Lupini beans in the shop. But when I found dried ones in our local supermarket, my do-it-yourself determination was switched on. It was a coincidence that I found the dried ones in our local supermarket, as they were called Tarmose on the package. Googling that also did not get me far. It might well be that this is the term of some Indian language for the Lupini, although I haven't found an Indian or subcontinental dish using them.

Two tips to make the bitterness go away faster:
1. Cook the lupins longer (about 2 hours rather than 1 1/2)
2. Use hot (almost boiling) water to soak them (after the cooking).

Once you find the lupini beans edible without any bitter aftertaste, keep them in airtight container covered in water and add about 3 tablespoons of salt (or more or less according to taste). Store covered in that brine in the fridge. There they keep for about two weeks.