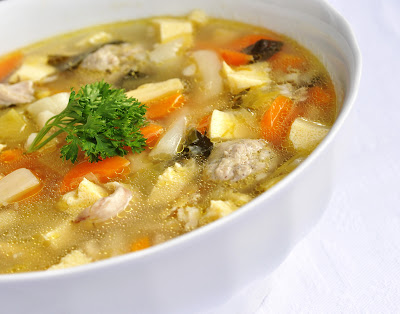 Winter time is cold season, even here in Dubai where winter temperatures do not go below 20C/70F during the day. Husband has been sniffing and coughing for more than a week. My son has had days with fever or without voice and horrible coughing attacks for about a week. And since this morning I can feel it coming too. I don't know yet where it's gonna go, but it feels chesty rather than nosy so far. Last man standing is my 2-year old daughter. I hope she's not gonna get sick. Sick 2-year-olds are hard work......

I think I am very lucky since I am hardly ever ill. My annual consumption of headache tablets probably doesn't exceed 5 tablets. But when I get a cold or just have the slightest fever, I feel like I am almost dying. In other words: I am suffering terribly and I am feeling awfully sorry for myself right now, although the cold is not even fully there yet.

So what is there to do to prevent the full blast or to make me feel at least a little better? CHICKEN SOUP!! It's the one and only thing. It goes down even when you don't feel like eating. It feels like it gives you back some strength. And even when you are not sick, I simply love this soup in winter: hearty, warming, lots of ingredients in just one bowl.

This  is and old traditional recipe from the region in Germany where I come from. It's actually called wedding soup, as the chicken broth with just some veggies and the custard royale was served as a starter at wedding parties. The actual chicken meat would be used for chicken fricassee as the main course. There is variations of this soup from family to family in the region. Now here is our version (as cooked by my parents who learned it from their parents):

In the meantime, combine all ingredients for the meatballs. Form balls of the size of a cherry or walnut. Put meatballs into the chicken broth and cook until done, about 10-15 minutes.

For the custard royale, whisk eggs and milk together until well combined. Season with salt, pepper and nutmeg. Place mixture into a small lightly, greased bowl. Cover the bowl and place it into a pot of slightly simmering water. Cook for about 30 minutes or until egg mixture has set.
Take the sold egg mixture out of the bowl, cut into cubes. Set aside.

Pull the meat off the chicken and into small pieces. Put it back into the soup. Add the asparagus. Heat the soup and add the eggs cubes at the end, heat for another 2 minutes. Transfer to serving bowl and garnish with chopped parsley.