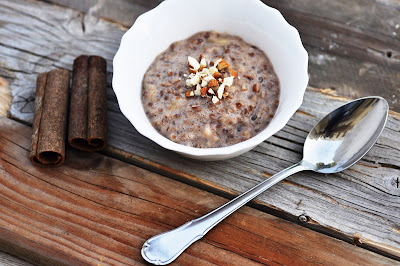 People are creatures of habit when it comes to foods and food routines. For instance, many like the same breakfast every morning. Lunches can be the same for 2 or 3 days in a row. However, dinner has to be different every night. Any logic behind it? Nope! Does it make sense? Nope!
Recently I got tired of my breakfast routine, which I had for at least 6 months, if not a year. I actually can't remember when I last had something else for breakfast than fresh fruit with yogurt and granola.
Time for change has come, and I had to look out for an alternative. While I bake muffins and breakfast cakes at least twice a week, I don't like them for breakfast. I need something not too solid that can to be eaten with a spoon.
While this buckwheat banana porridge will probably not last several months on my breakfast table, it is surely a good one to have in the coldish winter and early spring months. My idea was to create a gluten-free and vegan breakfast porridge. Despite its name, buckwheat does not belong to the wheat group and is gluten free. It has quite a strong and distinctive taste, very much on the nutty and earthy side.
For the first time ever, I used and tasted soy milk. This porridge is surely a good place to use it. Cooking the buckwheat in soy milk gives it a lovely creaminess. Adding a pinch of cinnamon adds to the warmy winter feeling that this breakfast provides. It's sweetened with raw mashed banana only. The chopped nuts add some crunch. On the whole, a filling breakfast, yet light on the stomach. A good meal if you have a long day ahead and surely a good thing to eat before long runs.
---------------------------------------------------------------------