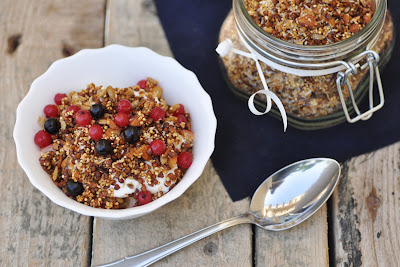 I have been trying to keep my diet gluten free for some time now. Not rigorously, but as a general rule I tried to avoid it to see what it does to my body, although I was convinced that I was not gluten intolerant or even allergic. The list of symptoms that can point to wheat intolerance is long and vague. It reaches from regular cold symptoms over bloated stomach and vomiting to arthritis.

I assumed, that if I ever had any symptoms, they were mild and would have affected my digestive system. For the time that I have had no or very little wheat and gluten in my diet, I have been feeling much lighter, less bloated after the meal. After a meal that included gluten I felt that my body was somehow much more preoccupied with digesting the food. Something that I wasn't actually aware of while gluten was still part of what I ate on a daily basis. Little discomforts that have been with me for years/decades, to an extent that they became part of normality. But now that it's gone, it feels great.
My good old granola in the morning is now an oat-free version, consisting of roasted buckwheat (kasha), millet and quinoa and a selection of nuts and seeds. I must warn you, it turns out very crunchy, and you probably don't sprinkle as much as an oat-based granola over your breakfast bowl. But the roasted kasha gives it a deep flavor, with a hint of vanilla, that I cannot get enough of.

I got a few comments on other posts in this  blog, where readers mention that they don't like millet. I actually think that buckwheat is pretty more a matter of taste, more so than millet.  The buckwheat that I use in this recipe is kasha, the brown roasted groats. It is widely used in Eastern European cuisine for all sorts of sweet and savory porridge. The idea of having kasha in my granola came from a store-bought roasted seed mix containing kasha, that I usually have over my salads. Give it a try. I just love it.

In a small pot, gently heat all wet ingredients. Take off the heat and let the flavors merge for a few minutes. Pour wet over dry ingredients and stir until well coated. Transfer mixture onto baking sheet and spread out in single layer. Bake for 20-30 minutes or until millet and quinoa seeds have turned golden. Let cool completely before storing in airtight container.
If the granola still feels a little wet, let cool. Then bake in the oven at lowest temperature for another 5-10 minutes.