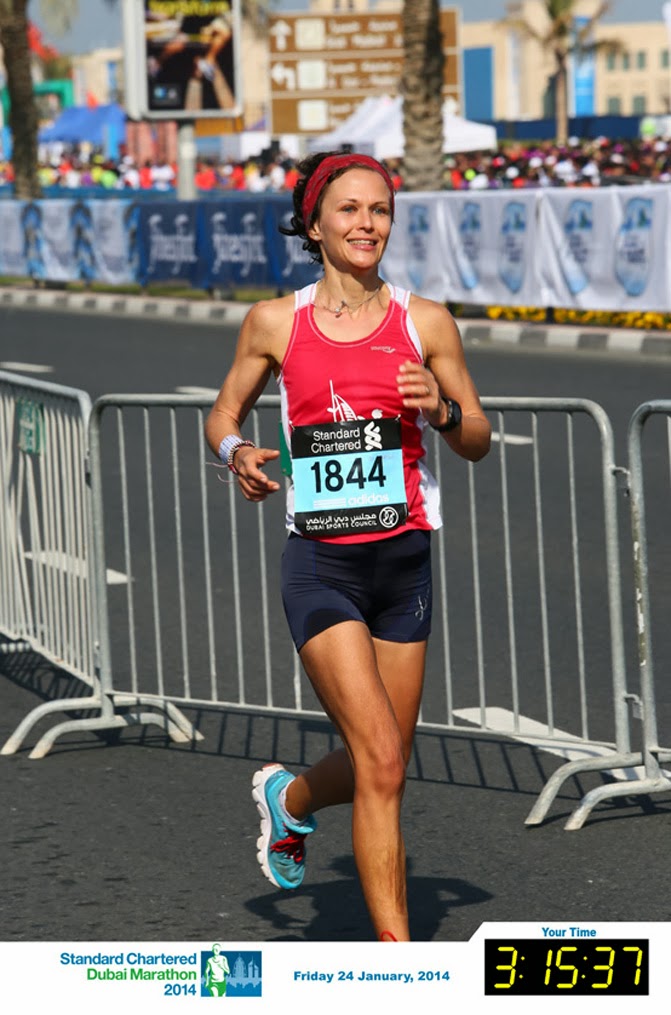 The weather was warmer than I had wished for, around 15C/59F.  I felt good, rested and ready. When the gun went off, I tried to get close to my average goal pace within a few kilometers. In retrospect, I must say I never felt 100% comfortable with the pace. I kept on checking my Garmin for the pace. It didn't come naturally. After 10k my hips and groin were already sore. It's an old "problem zone" of mine. I expected to get sore there, but not so soon. Between 20 and 30k I was considering giving up. Not seriously, but the thoughts were there. While my bones were sore, I was still able to keep up the pace. Up until 30k I was on for a 3:12 or 3:13 marathon. Not too far off my goal. At the same time I knew that I was not able to make up and go any faster.
The toughest part of the race started at 30k. Due to the nature of the marathon route and its surrounding road closures, there were hardly any spectators on those last 12k when everyone most needed them. It was 6k on a long straight road, and 6k back. All on your own. My pace dropped then, and I wasn't even sure if I'd make a sub 3:15 time. I knew which of the local female runners were in front of me, and as it was only a handful and all but one of the runners whom I wanted to beat (incl a long list of men) were behind me, I thought I am not doing too badly and might as well keep going.
A few local Anja's Food 4 Thought fans were on the roadside too and supported me. That was a great surprise. At 30k someone shouted at me "Go Anja go, I cook your recipes all the time." I loved it. Thank you!!! Another one shot pictures of me with just a few hundred meters to go to the finish line. Thank you too, Angelika!
Not surprisingly, I was absolutely exhausted at the end. I remember seeing the big clock at the finish line ticking away in the 3:15s. I remember thinking hard if that was a good time for me or not. I coudln't decide. My brain obviously wasn't working well anymore, as all my energy went into the running. A few friends were sitting in the grandstand at the finish whipping up the crowds and shouting my name. Jeez, I was glad that it was over.

I finished 33rd lady overall (which includes 20 something elite runners), and 5th in my age group.  A PB by 2 1/2 minutes from the Berlin marathon in September, and a whopping 11 minutes faster than the Dubai marathon last year.

It's been a week now since the marathon. It's still sinking in. A friend of mine keeps on asking me if I have realized what great performance I delivered. I am still in two minds. On one hand, 11 minutes off from last year's Dubai marathon is a huge chunk off. And it's a PB. A PB is faster than ever before. On the other hand, I had tried to get close to 3:10 for the second time (it was also my goal for Berlin), and I am still 5 minutes away from it. I know it was an ambitious goal, but I can't deny that there is a grain of disappointment in me too.

I have a feeling that the Berlin and the Dubai marathon were too close to each other. I started training for Berlin in July last year, then ran the marathon at the end of September. October was my "month off", but it felt incredibly short. By November I was supposed to start training for the Dubai marathon. I wasn't ready yet. It took me a while to get motivated again to run high weekly mileages. All in all, it was a very long and hard training spell with very little rest since last summer. It's for a reason that my hips and groin scream for rest.

I look forward now to not count weekly mileages, to go on long runs no longer than 20k and to just run for fun for a few months. Until it all starts again. My next marathon is Berlin again in September. Hopefully, I will get my 3:10:00 time then. Third time lucky?